On Wednesday as we were coming home to Ahousaht from Tofino,we were surprised by a pod of orcas surfacing along the shoreline on our starboard side.

They had been spotted earlier in the day but I hadn’t expected to find them so easily!

The lighting was perfect and we had a stunning west coast backdrop as the pod cut through the shortcut at Catface Rocks, something I have never seen before!

This is my favourite part of the coast… You just never know what you’re going to find! 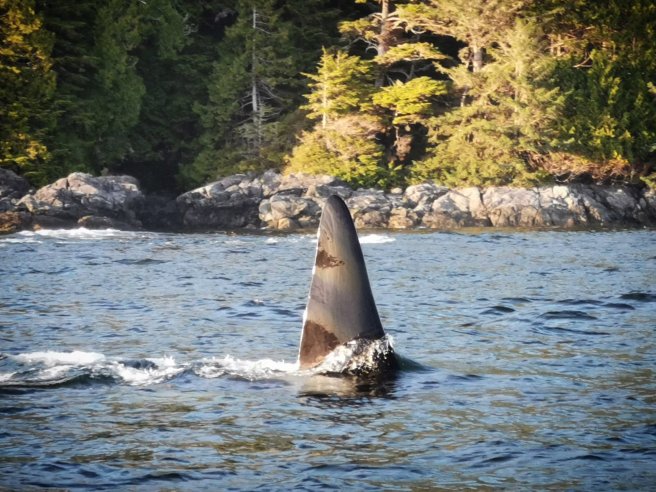 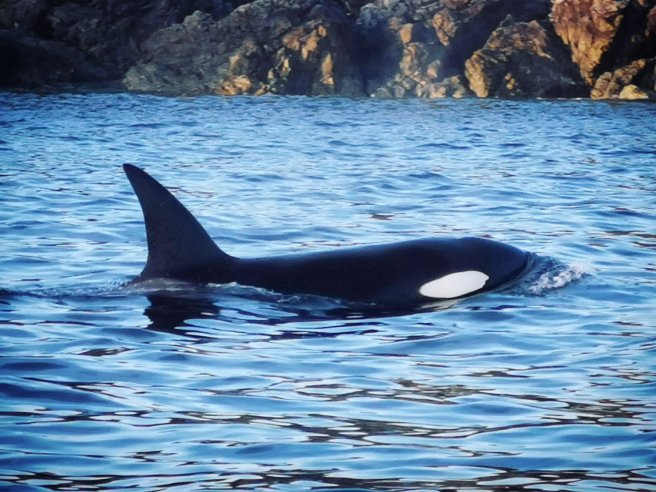 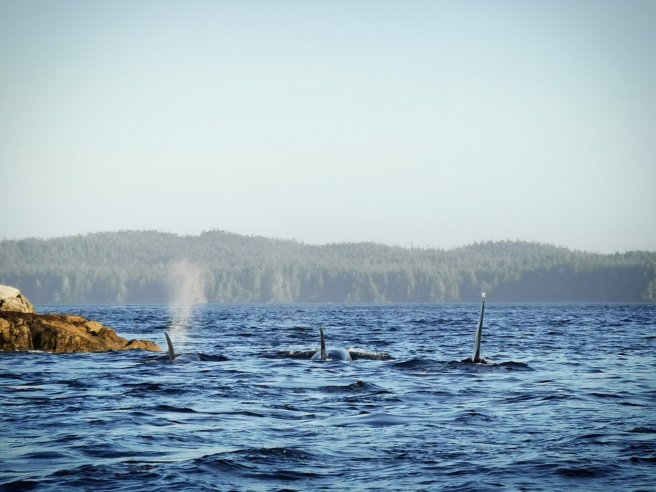 Just because it’s winter, our “slow” season, doesn’t mean the waters of Clayoquot Sound are any less exciting. If anything, it’s more of an adventure and with fewer boats and travellers on the water, the experiences become even more magical and special, witnessed by just a very few lucky individuals.

This group of transients was made up of about 3 different pods. There were 16 whales altogether! We call large groups like this a “T-Party”! It was a magical cruise up and down Sydney Inlet as we followed the groups, likely scouting for seals or porpoise to munch on for lunch. The glassy conditions meant the water’s surface tension created a bubble over the whale’s heads when they surfaced and I finally got some spectacular photos I have been dreaming of for years!

Scroll down to see all the pics and check out the little calf featured in the last few shots! 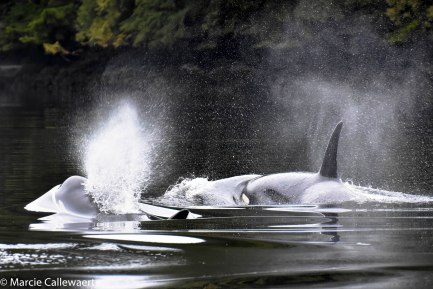 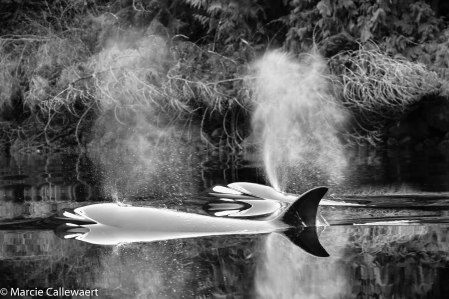 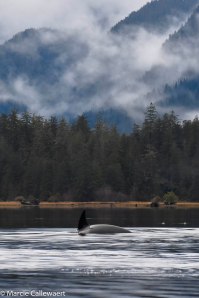 ~Every Day is a New Adventure~

One of the most impressive sights in the ocean is a lunge feeding humpback. These magnificent animals can reach up to 16 meters in length. Their typical feeding pattern in our waters is to lunge at near surface schools of small feed material. This whale had a very predictable pattern of two-three surfacings and then a lunge. This whale was identified as CS178 (It’s actually identified twice within the Clayoquot Sound catalogue).

One nerve-wracking part of our encounter was how close the whale came to the Bawden Point fish farm. Alexandra Morton filmed small fry being eaten by farmed salmon and being attracted to the feed drifting from farm pens in 2016. Several humpbacks have been caught or killed by farm pens in BC waters in recent years. We were rather concerned that this could repeat itself based on the feeding patterns of this whale, but were very relieved when it moved around the pens and anchor lines to feed in another bay. 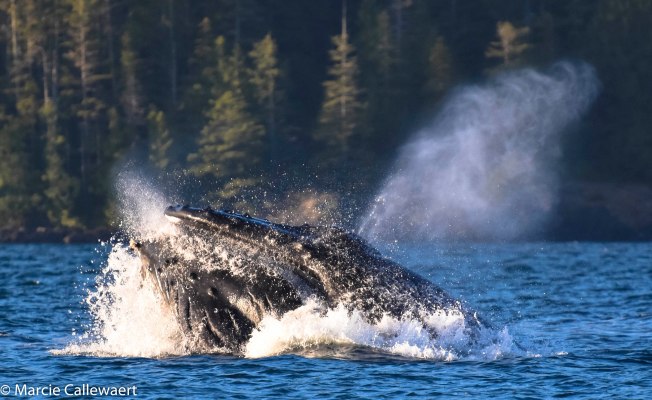 I will never forget this encounter. It’s rather disappointing that we didn’t get to share it with anyone! But thankfully, humpback whale sightings have been increasing in BC waters since their decline due to commercial whaling on the BC Coast. The Salish Sea and waters off Northern Vancouver Island now have year long humpback residents. This has increased the possibilities of boat strikes and entanglements, but BC has responded well and are looking out for our returning gentle giants. As we always should be.

Coming back from Hotsprings Cove we swung wide (4 Miles offshore of Flores Island) to look for a pod of orca reported to be in the area. No whales to be found but that was alright – considering the phenomenal sunset we were able to watch from the open water! 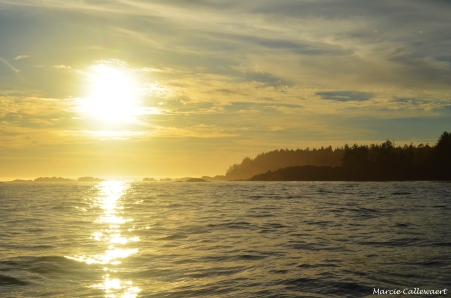 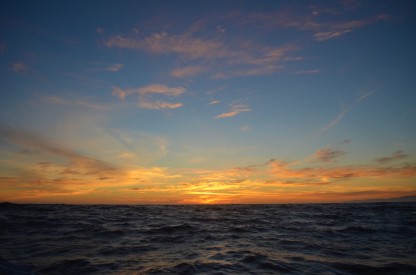 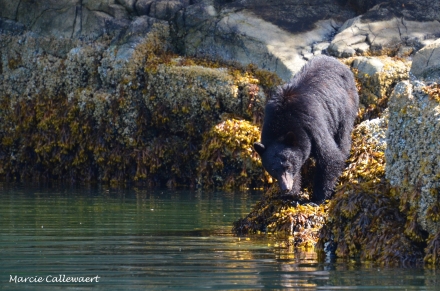 A surprise encounter on our way to Hotsprings Cove!

It was great to slowly idle along and watch this black bear forage along the seashore for crabs, starfish and berries. It is always a blessing to see wildlife in their element, especially when they let you into their world for a brief period.

So many adventures lately from Hotsprings Cove to watching wolves on the shoreline… Even some bear watching (Minus the bears 😦 ). But we’ve had a ton of fun and so, I hope have our guests!

Taking off from the Ahousaht Harbour 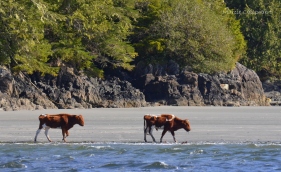 We received a call from a local water taxi company that orcas were near Ahousaht. I was painting at the time when Lennie told me and I put down my brush – “Can we go?”

2 min later and we were running down the road. We made one stop to bang on a co-worker of mine’s door to see if they wanted to come too – No answer.

To the dock we went and headed out to find the whales. We joined up with the T11s north of Catface Rocks and followed them out around Monks Island and back in towards Hippie Point and Bedwell Sound.

They were switching between fast travel, long dive patterns, short dives and spreading out to hunt. It wasn’t long after they entered Bedwell Sound that they killed and ate a porpoise! The light was quickly fading though and we left them heading towards Rand Point, further into Bedwell Sound. 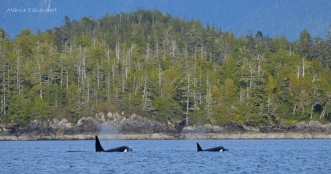 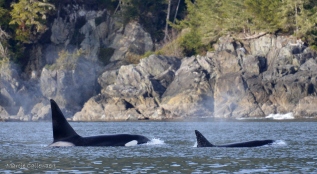 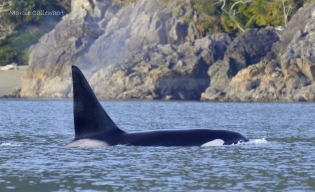 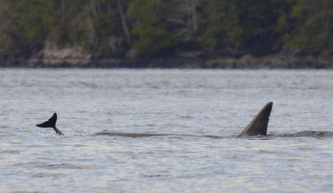